Alberta receives a lot of attention in the summer. The central hubs of Banff, Lake Louise and Jasper get pretty busy during the peak months of July and August.

But maybe you should consider visiting in Winter. Temperatures can drop below minus 30C (-22F), sometimes even below -40C (-40F). Numbers, although informative, can’t really portray the feeling of being this cold.

Until you’re acclimatised it’s tough. Snow can reach depths of over 10m and road closures due to avalanches are a common thing, but don’t let these facts get into your head!

Alberta in the Winter is absolutely beautiful!

I spent the whole winter in Alberta, apart from a quick holiday to Antigua to thaw out, and can truly say that it’s a winter wonderland. Although the temperature may put you off, to begin with, there’s a lot to see and do here.

What is it like to live in these conditions you may wonder? I’ve learned that it is more fun than expected. Canada is an endless playground for those who are ready to embrace the cold!

You can go snowboarding or downhill skiing in the many ski resorts scattered around the country. If that’s not your thing try cross country skiing, snowshoeing, ice climbing or snowmobiling.

Seriously, there are winter sports offered here which I have never even heard of before! Kite skiing anyone?

Some of the best places to plan your winter excursion in Canada are Banff National Park and Jasper National Park in Alberta or Whistler in British Columbia.

If you are after once in a lifetime experiences, consider visiting the Canadian Northwest Territories to see the Aurora Borealis. As I said, the choices are plentiful.

Have you been to the Canadian Rockies in the Winter and have some awesome photos from your holidays? Share them in the comments! I would love to see them.

Where to Get Stunning Photographs in Jasper National Park 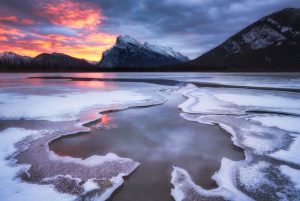 Where to Get Postcard Worthy Photos in Banff National Park