Near the tallest mountain in all the land, in a country far far away, lay a mountain hut unlike no other. It was named Mueller Hut

The hut was named after the nearby Mueller Glacier. The glacier in turn was named after a Danish born Australian scientist who was exploring and documenting some of Australia’s less frequented ranges, makes perfect sense right?

A brief history of the Mueller hut

Originally built in 1914, the Mueller hut was used as a shelter to explore the glacier. In 1947 it had to be replaced due to deterioration.

Between 1947 and 1953 there were 2 more Mueller Huts that were destroyed by avalanches. The longest lasting hut was then built quite close to the one existing today. It was replaced on its 50th birthday in 2003 and the present-day hut was erected.

Learning from mistakes, the new hut boasts a robust metal frame on top of a sturdy platform and an incomparable view. Although the way leading to the hut may be treacherous at times, it’s certainly one of the best hikes on the South Island of New Zealand.

The route begins at the White Horse Hill Campsite which is a few kilometres past Mount Cook Village. The trail is well signposted and starts on the same, wide, well maintained track as the Kea Point Lookout. After around 10 minutes in, it breaks away to the left. Look out for the sign!

This first section of the trail visits the Sealy Tarns. It’s a steep start that gains elevation via seemingly never ending staircases. It’s a real knee buster and is very exposed to the elements.

The next part of the trail between the Sealy Tarns and the pass is just as steep, but on a thinner rocky pathway as opposed to staircases. It can be tricky in parts so just take your time. You’ll know you’re close to the pass when you reach a large boulder field. Take care in wet weather as the rocks can become slippery.

The whole route after the Sealy Tarns is marked by poles with orange triangles on them. Follow them to stay on the right path.

The last section is between the pass and the hut. It’s much more gradual and only takes around 30 minutes.

The total length of the track one way is 5.2km, gains 1050m of elevation and should take 3-4 hours on way on average.

The hut has 28 bunks in two separate rooms, a large communal kitchen, a huge deck and potable rain water. It also has several hobs with gas provided.

In the summer months it houses a volunteer warden that makes sure everyone has arrived safely and generally maintains all the facilities including two long drop toilets. Go back to the photo with the rainbow above to know what I am talking about.

The amenities in the winter are varied and should not be relied on. Avalanches are a major concern here, for a winter ascent, don’t venture out without the necessary equipment and knowledge.

3. Is staying overnight in Mueller Hut worth it?

Mueller Hut is busy, I’m not going to sugar coat it and if you think this will have a negative effect on your enjoyment then maybe you should consider an overnight stay in a different hut.

Saying this, the last time I was there was mid March 2018. Due to bad weather, my partner and I were 2 out of 6 people who made it to the hut that day.

Luckily for us the next day the weather cleared and I got to experience first hand what all the fuss is about. No matter how many steps and snorers you’ll need to battle against, the views will generously compensate for the suffering!

4. Making reservations for the Mueller hut

During hiking season (Mid November to the end of April) bookings are mandatory. Outside of these dates the hut operates on a first come first served basis.

All bookings for the hut can be made on the Department of Conservations Online Booking Portal. On the day of your stay in the hut, you must visit the DOC Visitor Centre in Mount Cook Village to check in and collect your tickets.

If the weather conditions are severe you will receive an option to cancel or reschedule your stay. If you decide to cancel your payment will be reimbursed in full.

If you didn’t manage to secure a reservation or the idea of staying in a snore infested bunk room isn’t appealing. I’ve got some great news for you. It is possible to stay in a tent near the Mueller hut too!

There are two options for camping. 15 dollars per person will get you a tent site with a rocky cairn blocking the wind and the use of the hut facilities.

If this is still too expensive then you can even pay nothing at all, but you have to camp 200m away from the hut and you aren’t allowed to use the facilities. You still have to check in with the warden if this is your plan.

I say go with the first option. New Zealand’s Department of Conservation does an amazing job in maintaining the trails to the hut, so don’t be a cheap skate and contribute a few bucks. 15 bucks for stellar views like these is nothing!

6. What can you see along the Mueller hiking trail

Talking about the views, did the hike completely wear you out? Make yourself a cup of hot chocolate and chill on the hut’s porch.

You can see Mount Cook perfectly whilst staring out the window or sitting on the balcony. Still got some energy left? Drop your stuff at the hut and continue up to Mount Ollivier for a 360 degree panoramic view of the surroundings.

The route from Mueller Hut to the false summit of Mount Ollivier takes around 30 minutes and involves basic scrambling over large boulders. It’s directly due south of the hut only 500m away and impossible to miss.

The real summit offers views very similar but not as expansive as the false summit.

The majority of people only visit the false summit but still claim that they have summited Sir Edmund Hilary’s first mountain.

Whilst standing on either summit of Mount Ollivier, you’ll see Mount Cook to the north and below it the Hooker Glacial Lake.

Turning anti clockwise you’ll see numerous glaciers clinging to Mount Sefton, the Hooker Range to the west, Mount Sealy and Mount Annette to the south, the northern tip of Lake Pukaki to the south east, then the Tasman Valley out east before your attention is again on Mount Cook.

If you’re feeling really adventurous you can continue past the false summit of Mount Olivier, to the real summit, then further on to Mount Kitchener. A harder scramble that should only be attempted by more experienced hikers.

Mount Ollivier’s highest peak was one of Sir Edmund Hilary’s first summits and I like to think, that it’s what ignited a spark that would later see him becoming the first person to summit Everest, amongst many other great mountaineering achievements.

This beautiful backcountry hut in New Zealand isn’t a secret and booking competition becomes pretty fierce when bookings open at the end of June each year. The sooner you plan it, the better.

However saying that, cancellations do occur so by continually checking the online booking portal you might get lucky. I did that whilst looking for openings on the Milford Track, which is even harder to secure a spot and I managed to get a reservation!

Mount Cook Village features on all of my road trip itineraries in my free New Zealand Travel Guide because I just simply believe you shouldn’t miss it when travelling in New Zealand. Make sure to include it in your plan too!

Have you got any questions about the hike? Leave them in the comments below! I always answer! 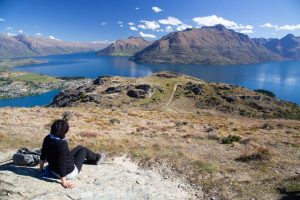 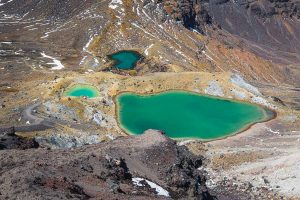 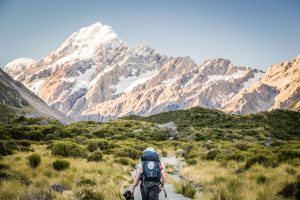 14 Best Day Hikes on the South Island of New Zealand