If you really want to experience the Dolomites the best way to do it is to plan a hut-to-hut trip! With the amazing hut network, it would be a sin not to take advantage of it.

This is an article that was over 2 years in the making and today I am including my top picks for hut-to-hut trips in the Dolomites all of which I completed myself!

Roughly 140 kilometers long Alta Via 1 is the classic route of the Dolomites and also the easiest one. With that said it’s not a walk in the park! The total elevation gain on this route (not including the extensions) is 7200 meters. That’s more than 23.5 thousand feet!

Alta Via 1 can be completed anywhere between 7-12 days, but I’d say 10 is the optimal amount of time if you want to properly enjoy the landscapes. It starts at the famous Lago di Braies and ends near the city of Belluno both well connected with public transport.

I have hiked Alta Via 1 with my dad at the start of the summer season of 2019 and because of it, it will always have a special place in my heart.

I sometimes take my job for granted and seeing my dad being in awe of the views with every step he took reminded me of how lucky I am! Visit my Alta Via 1 guides (Part 1 and Part 2) if you are planning to hike this traverse.

Fact: There are 6 official Alta Via routes in the Italian Dolomites dating back to World War I. The routes were established for the soldiers to move along the frontlines.

This was the first multiday hut-to-hut trip that I undertook in the Dolomites and I was instantly hooked!

Rosengarten Traverse follows the route across the Schlern-Rosengarten Nature Park, a lesser-known (at least on an international scale) part of the Italian Dolomites.

The route includes a series of beginner and intermediate via ferratas and passes by the beautiful Vajolet Towers.

I have a soft spot for this route because it involves an overnight stay in one of my favorite mountain huts – Rifugio Passo Principe built on one of the passes along this traverse.

It’s also one of the shortest backpacking trips on this list requiring only 3-4 days to complete. A perfect choice for anyone who would like to experience hut-to-hut hiking without sacrificing their whole holiday for it.

This is the longest route on the list and takes between 10-16 days to complete. Alta Via 2 totals almost 200 kilometers and gains over 10500 meters.

Don’t worry though, it’s also possible to just walk a part of it! I have met plenty of people on Alta Via 2 who first walk only half of it only to return a year or two later to hike the second part.

Starting near the city of Bressanone (Brixen) in the North Alta Via 2 crosses Puez Odle Nature Park and the moon-like landscapes of the Sella group.  It also passes by the slopes of Marmolada – Dolomite’s highest peak and crosses the rugged Pale di San Martino range.

What I loved about this route is that it gets progressively quieter. During the last 4 days of the trek, I hardly saw any other people, and the huts were very quiet even though it was the middle of the summer season when I hiked it.

Pale di San Martino is one of the ranges crossed on the Alta Via 2 but if you are short on time you can just choose this 3-4 day traverse instead.

This slightly modified route starts near Passo Rolle – one of the most scenic mountain passes in the Italian Dolomites and traverses through the heart of the group. There are a few beginners via ferratas and summit extensions you can do along this crossing.

Pale di San Martino lies in the beautiful Trentino region of Italy and it isn’t exactly an obvious choice for overseas travelers, but that’s what makes it great in my eyes! A truly off-the-beaten-path experience.

This is my favorite Alta Via out of the ones I’ve done. Even though it is the shortest it’s definitely the most challenging!

There is a via ferrata to be tackled on all but the first and last day of the Alta Via 4 but you won’t forget those views for the rest of your life!

This 6-day traverse begins near San Candido in the North and finishes ca. 100 kilometers later in the little town of Pozzale in the Southern Part of the Dolomites.

Tre Cime National Park is the most famous park in the Dolomites. Most tourists flocking this way focus on the Tre Cime loop day hike. However beautiful this hike is, it is also extremely busy.

Those who dug for information a bit deeper might have heard of the via ferratas Innerkofler or Torre di Toblin. Two classics via ferrata routes within the park, both starting at the picture-perfect rifugio Locatelli.

If you want to experience Tre Cime NP away from the crowds but still see a lot of its highlights (including the ones I mentioned above) consider this 4 day backpacking trip starting with the hike through Val Fiscalina – one of the most impressive valleys in the Dolomites and ending with via ferrata Merlone.

A winter ski trip to this region brought an idea to my head to return in the summer season with a self-planned multiday route exploring this range.

The Adamello Brenta Dolomites just like the Pale di San Martino group lie in the Trentino region of Northern Italy. This was by far the most exciting traverse I have done. With 8 via ferratas spread across 5 days, there was definitely enough adrenaline to keep us going.

And the views! With the barren-moon-like landscapes, a few small glacier crossings, and many hours spent on ledges traversing underneath 3000 meter high peaks, the Dolomiti Brenta circuit is hard to compete with!

What’s the best time of the year for backpacking in the Dolomites?

As with most mountain ranges around the World, the hiking season is very short and the Italian Dolomites are no exception. If you were planning to do any of these trips during your spring break then I can tell you now that the only thing you can plan for is a ski trip!

The official hiking season lasts from the third week of June until the end of September, that’s also when the mountain huts stay open. The snow often remains on the northern slopes well into July, sometimes it doesn’t disappear completely.

If you are looking for late-season hiking, some huts in the Rosengarten group tend to stay open until mid-October, but snowfall isn’t uncommon at this time of the year.

If you have never stayed in an Italian mountain hut before, here is everything you need to know before you book your first night.

Have you done any of these trips? Do you have any questions? Make sure to post them in the comments below! I answer all of them personally. Make sure to check out my Italian Dolomites Guide for stress-free trip planning to this corner of the World. 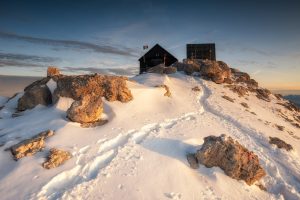 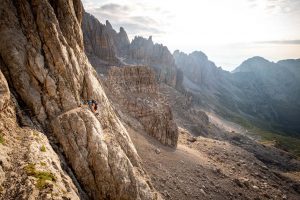 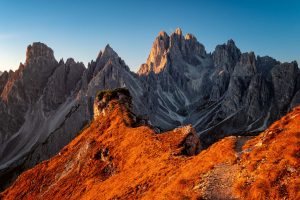 Backpacking In The Italian Dolomites: A 4 Day Hut To Hut Excursion Across Tre Cime National Park