With a lighthouse around every corner, beaches rumoured to be up to 90 miles in length, large sand dunes and more backcountry huts than you can count, New Zealand’s North Island should blow some wind into your photography sails.

The North is more tropical, lush and green. It’s home to long beaches and thick native bush. The south on the other hand is more mountainous and rocky.

Just like the rest of the world, the sun in New Zealand rises in the east and sets in the west. This means that all the photography locations on the east coast are generally better for sunrise and accordingly the spots on the west coast are better at sunset. We will get to ‘what is where’ in a moment.

Starting with the top of the top, Cape Reinga is situated as far north as you can go on the mainland. It’s home to a very picturesque lighthouse lying at the end of a windy path. Perfectly used as a leading line.

Looking just to the left of the lighthouse from the path you’ll be able to see where the Tasman Sea meets the Pacific Ocean. Waves overlap in a patchwork of rising and falling white froth. It’s also where the Te Werahi Track starts, one of the best hikes on the North Island.

Mount Taranaki, or Mount Egmont as the European settlers called it, lies close to the West Coast. The nearest city of any size is New Plymouth.

There are several viewpoints of the mountain but the most popular is the Pouakai Tarns near the backcountry hut with the same name.

It’s roughly a 2.5 hour hike to the tarns but seeing as the Pouakai Hut is one of the best backcountry huts in New Zealand then why not stay there and visit the tarn at sunrise?

They are only 15 minutes away from the hut.  Be warned though, Taranaki is a very shy volcano and it often hides behind the clouds!

Located in the northland region, only a short drive away from Cape Reinga, the Te Paki sand dunes aren’t exactly Wadi Rum or the Sahara, nevertheless if you are looking for a great photo spot, don’t miss it.

A short walk from the car park and you’ll have more sand than you can handle, probably in places where sand doesn’t belong! Keep an eye on your camera gear!

Watching sand boarders racing down the slopes or finding interesting sand formations are my favourite activities there.

A piece of advice, leave your shoes in your vehicle and go bare foot.

On the eastern shores another great lighthouse stands out amongst the rest for its beauty. Castlepoint Lighthouse has several vantage points that showcase its surroundings.

From the car park it’s an easy 10-minute stroll up to its base along a sand beach, then a concrete path, then a ridiculously photogenic boardwalk. The windy boardwalk leads the eye directly to the prominent lighthouse if you set up in the right spot.

5. The Emerald Lakes on the Tongariro Crossing

Apart from Mount Tongariro and Mount Ngauruhoe, the highlight of the Tongariro Circuit (and crossing) are the three Emerald pools.

They are located roughly in the centre of the 20km crossing and the best spot to photograph them is directly on the path. Learn more about the Tongariro Crossing here.

It’s the hardest spot on this list to get to but worth every effort.

Chances are you’ll be flying into Auckland if you’re visiting the North Island on a road trip and although I think you should get out of the city as quickly as possible, I do understand that you may have to spend a night or two there recovering from jetlag or acclimatizing to the 100% humidity that Auckland often has.

Auckland’s photography spots are generally dominated by the Sky Tower and the summit of Mount Eden is no different. Although it has closed to automobiles the little volcanic crator is still open to foot traffic.

The summit is around a 30 minute walk from the nearest car park and a perfect spot to capture Auckland’s skyline.

You have probably noticed, we are following a little pattern here. Summits prove to be really photogenic here in New Zealand.

The ‘Mount’ as its referred to by locals is a 45 minute hike along the eastern coast very close to the centre of Tauraunga.

Upon summiting you understand why the beach front properties are worth a few million dollars each. The crescent shaped capes stretch as far as the eye can see and two small islands lie just off shore.

I have hiked here for sunrise on my 29th birthday and have received the best present from mother nature: the spectacle of fog rolling through the city.

8. The Three Sisters and The Elephant Rock

Unfortunately the Elephant Rock literally lost its face during an earthquake in 2016. However, it’s still worth paying a visit to and so are the Three Sisters that lie close by.

hey rise out of the sea very much like the Basalt Sea Stacks in Reynisfar, Iceland and are a great spot to watch the sunset. You can get to them by driving for an hour north from New Plymouth and taking a short walk down to the beach.

If you want to be closer to the action then the town of Tongaporutu is the closest place to stay. Make sure you coincide your visit with low tide.

Rotorua is one of my favourite cities on the North Island. Its densely populated by Mãoris, who have made sure that the land is now protected from commercial interests and environmental issues are dealt with precision and care.

The protected Redwood Forest is a great example of this. Commercially it is worth a fortune but thankfully no amount of money can buy it.

Another hot photo spot far up north near Cape Reinga is Tapotupotu Bay. It’s also home to the best campsite I have stayed at on the North Island.

Sheltered from civilisation and with a beach that could easily compete with some of the best beaches in the World! This place is features on my four to eight week itinerary around New Zealand.

To get a great aerial view of the bay make sure to hike up the hill on the left side of the beach. It will only take half an hour!

With certainty, this is the most famous photography spot on the North Island, so to get your picture looking like the one above you will need to use some photoshop skills to crop out others. Cathedral cove is on the east coast in the Coromandel region only a couple of hours away from Auckland.

The closest town with any significant features is Hahei where a few hotels, a campground, a small shop and a couple restaurants can be found.

From there it’s a short 10 minute drive to the Cathedral Cove car park and another 30 – 45 minute undulating walk to the beach along a wide paved path with intermittent section of boardwalk and wooden staircases.

The cave is certainly a sight in itself but there are several other rocky outcrops that make fantastic photographic opportunities.

If you’re going at sunset don’t forget to take a head torch so you can get back safely.

A small, free-spirited town, renowned for being ‘The Gateway To White Island’, Whakatãne has a very picturesque statue of Wairaka and a beautiful coastline.

Wairaka, and all the other females of an exploring Mãori tribe, were aboard a canoe which was slowly being washed out to sea whilst the men were exploring on land.

The women were forbidden to touch the oars but seeing as Wairaka understandably didn’t want to die at sea, she picked up an oar and started rowing back to shore shouting ‘Kia Whakatãne au i ahau’ which means “I will act the part of a man”.

When other women joined in, they were quickly saved. In honour of her bravery and courage a statue has been erected and the town named Whakatãne.

Before you get any ideas The Tauranga Valley Lookout is not near Tauranga. The Tauranga Valley is situated a short drive north of the Bay Of Islands. This road is very close to a great hike on New Zealand’s North Island called St Paul’s Rock. In the distance you can just see Tauranga Bay.

I think this spots represents what North Island is all about –  lush, rolling hills along the coasts reaching further then the eye can see.

Well there you have it. These are some of my favorite photography spots that the North Island of New Zealand has to offer.

Hopefully my photos will inspire you to visit some or hopefully all of them.

As always, this list is subjective and nowhere near exhausted. If you have other suggestions feel free to leave them in the comments! Same goes for questions!

Are you planning a trip to New Zealand soon? Make sure to visit my free New Zealand Travel Guide with tips on photography spots, hiking and backpacking guides and plenty self drive road trip itineraries to choose from! 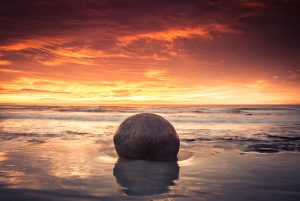 18 Most Photogenic Places on The South Island of New Zealand 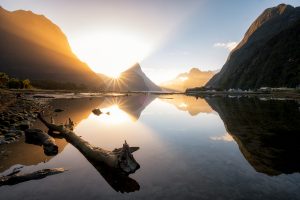 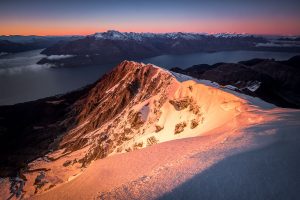